Goldilocks & the Bulls & Bears…. Is the Stock Market Just Right?

Who would have predicted the stock market rising to record highs, in the middle of a recession, with US double-digit unemployment?

At the close of March 2020, Warren Buffets Berkshire Hathaway had a record $137 billion in cash. Obvious reluctance of Buffett’s conglomerate to make stock purchases may have acted and maybe still does act, as a red flag to many. Furthermore during the recent period of quick recovery , there have been significant concerns that the tech-led coronavirus stock market rally could fall flat on its face.

So the idea of the next free fall is prominent in the minds of many due to elevated volatility. But the stock market is surging, even if the economic picture is dire.

Should investors watch out for another market dip?

Despite 2020’s turbulent months and a fear from many investors of a second wave of sharp declines, it’s important to remember the stock market is not the economy. Just because investors react quickly and negatively to a breaking news story doesn’t mean that those fears will materialize. But this is the nature of markets. People will overreact on the upside and the downside.

All told, stocks are now deeply entrenched in a new bull market, less than 6 months after a vicious sell-off sparked by the COVID-19 outbreak obliterated all of the Trump era gains.

Last week, the Fed announced a policy change whereby it will let inflation and employment numbers exceed its usual targets, before stepping in to put on the brakes with interest-rate increases. Moreover, interest rates are likely to stay lower for longer under the new monetary policy framework

Now, many believe we are now in fact entering a Goldilocks economy.

A Goldilocks economy is an economy that is not too hot nor too cold. In other words, sustains moderate economic growth, and that has low inflation, which allows a market-friendly monetary policy.

So if economic data is weaker than anticipated, then stock traders will assume that the Fed will remain accommodating. If the Fed keeps its monetary policy stance dovish, the stock market is likely to rally.

On the other hand, if the economic numbers begin to improve substantially, investors aren’t likely to panic. The assumption will be that the Fed is happy to allow the economy to run hotter because its average inflation target is 2%. Under this scenario, the stock market may continue to move higher.

According to Goldman Sachs, “while equities have never been as expensive since the Tech bubble, based on a 24-month [price/earnings basis], the equity risk premium is close to an all-time high, suggesting that: equities have rarely been as attractive relative to bonds.

So despite continual rumours of more doom and gloom to come, Following the best month in decades for stocks, investors are now hopeful.

And whilst no one can say with any certainty that we will avoid another crash. Or that if indeed if it is inevitable, when it will happen. it is prudent to remember that when the bull and bear markets are viewed together, it’s clear equities have rewarded disciplined investors.

The expectation is that bearing today’s risk will be compensated with positive expected returns. 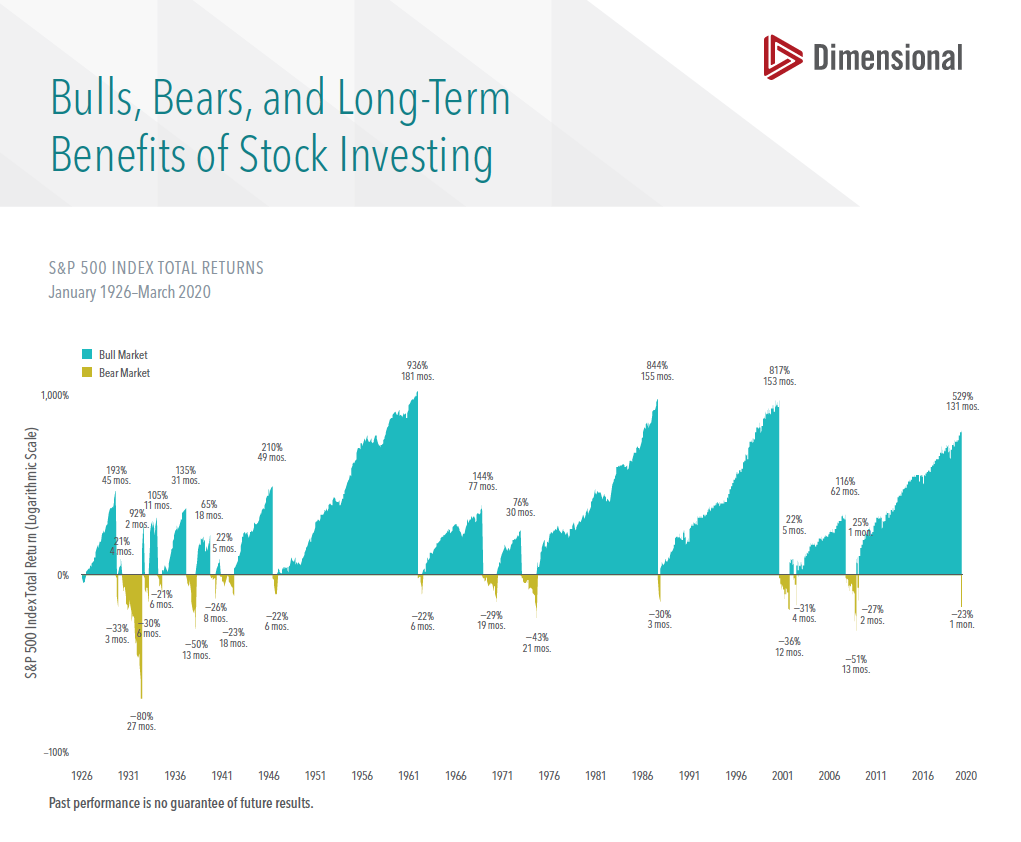 On the upside, there were 17 bull markets, or gains of at least 20% from a previous trough. They averaged 56 months in length, and advances ranged from 21% to 936%.

When bull and bear markets are viewed together, it’s clear equities reward disciplined investors. That’s been a lesson of past health crises, such as the Ebola and swine-flu outbreaks earlier this century, and of market disruptions, such as the global financial crisis of 2008–2009. Additionally, history has shown no reliable way to identify a market peak or bottom. These beliefs argue against making market moves based on fear or speculation.

In the past century, there have been 15 recessions in the US. In 11 of those instances, stock returns were positive two years after the recession began. Investors may be tempted to hold off investing, or abandon equities and move to cash when there is heightened risk of an economic downturn. But research has shown that stock prices incorporate expectations of recession and generally have fallen in value before a recession even begins. 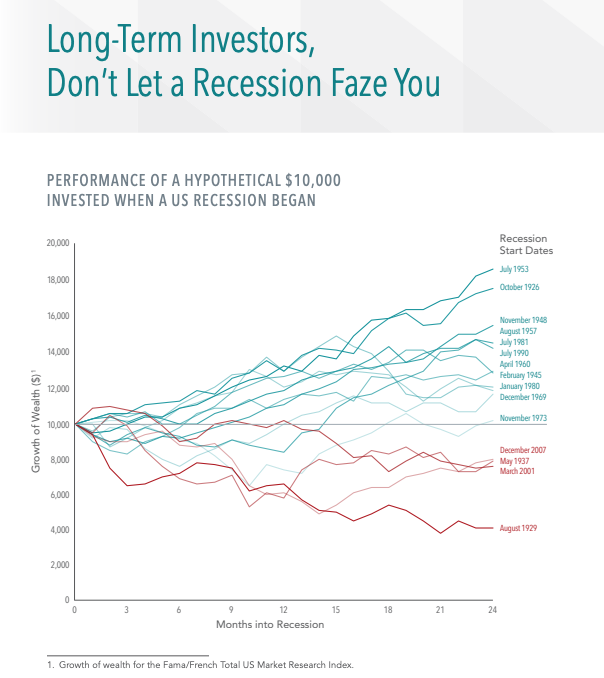 The average annualised return two years after the onset of these 15 recessions was 7.8%.

Whether you believe this is a Goldilocks economy or not. We all know stock returns are volatile, but nearly a century of bull and bear markets shows that the good times have outshined the bad.

The markets reward the disciplined investor.